"Sometimes radical out-of-the-box thinking is called for when faced with seemingly insurmountable problems. Reconstructing accurate address maps for Soweto – many years after they had been destroyed – was one such challenge."

Utility companies were contracted by the City of Joburg to install and maintain utilities in Soweto. The job request contained the dwelling stand numbers as used by residents, while the only existing maps for Soweto contained completely different addresses that were never adopted by the residents, causing a disconnect between what was happening in theory on the maps, and what was happening on the ground. This meant that service providers had to rely on local knowledge, asking members of the community along the road for guidance to their destination. Emergency services, including police and ambulance services, also had no maps and had to request persons in distress to meet them at known landmarks and then guide them to their destination, wasting critical time in the process.

Before 1994, housing in Soweto consisted mainly of rental properties administered by the authorities. Many of the properties were semi-detached dwellings with two or more housing units on a single stand. The residents used the original stand numbers as addresses. In the case of semi-detached dwellings the letters A, B and C were added to the stand number to differentiate between the constituent dwelling units.

After 1994, a decision was taken to transfer ownership of the properties to the rental occupants of the properties. As a deed refers to the land and not the house, the stands that included semi-detached dwellings, had to be subdivided to make deed registration possible. As the dwellings already existed, this had to be an “as-built” subdivision. This also explains the very strangely-shaped stands in many parts of Soweto. The dividing boundary, separating the original stand, had to follow the inside walls of the semi-detached house separating the two, or more, dwelling units. 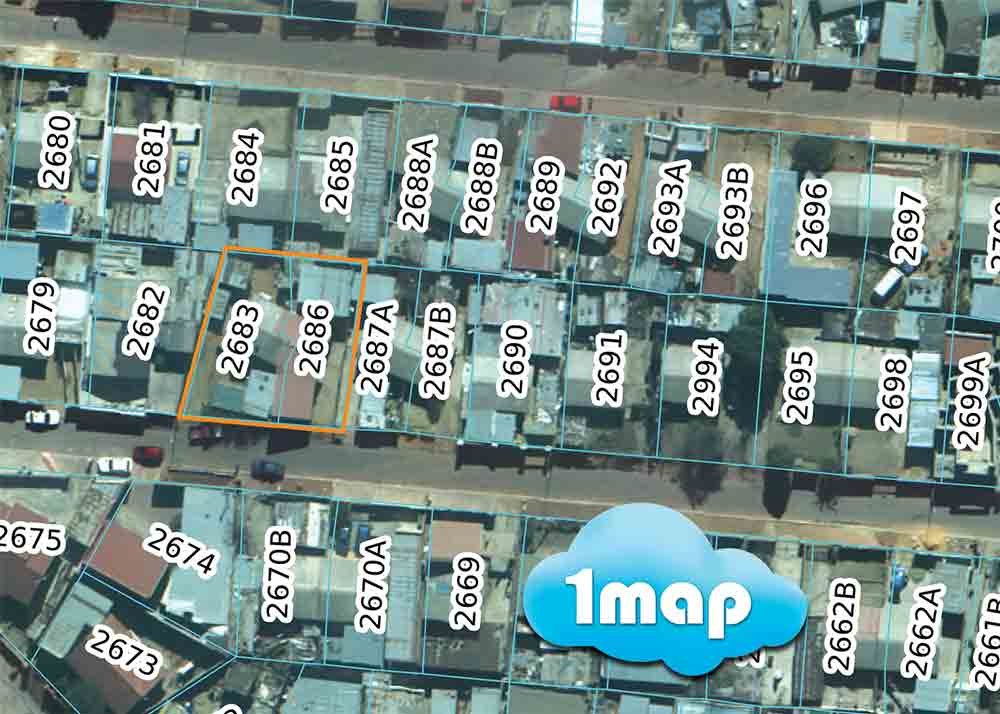 After subdivision all the historic maps disappeared and it was assumed that the residents would adopt their newly allocated stand numbers as their addresses. This was not to be as the residents continued using their historic house numbers, many of which were painted on their houses. The city embarked on a major project confirming street names and allocating names to many areas where there were no street names. Street numbers were assigned in the conventional address numbering manner, with odd and even numbers on either side of the road. Still the residents persisted in using their historic house numbers.

1map Spatial Solutions was called in to create maps showing addresses as used by the community, with no historic maps as reference, no historic cross-reference information, and with very few numbers appearing on the dwellings.

Outlined below are the steps taken by the company to restore historical address maps for Soweto.

Step 3: Identify addresses within the same suburb – preferably in the same street as the registered property. This would then likely be the address used by the occupant of the property.

Step 4: Populate the GIS with the addresses presumably used by the owner/occupant.

Step 5: From the aerial photography identify which properties came about through subdivision and what the original properties would have looked like (reverse consolidation).

Step 6: Using the assumed historic stand numbers, identify the pattern used when allocating the original stand numbers and fill in the gaps.

Step 7: Study the pattern used in deciding the direction in which the A, B and C signifiers were allocated and, once again, fill in the gaps.

Step 8: Do spot checks against numbers appearing on houses to validate previous assumptions.

1map’s commitment to restore all of Soweto’s house number maps must not be viewed as support for the practice of using house numbers. Having completed this project, the company is of the opinion that a concerted effort should be made to phase out stand and house number addressing, and switch addressing throughout the country to conventional street number and name addressing.

Offline, in-vehicle GPS devices carry no data pertaining to actual street addresses. These devices compute their destination by interpolating the distance between street nodes, where the street number is known at the respective nodes, with the assumption that street numbers increase or decrease on both sides of the road, in the same direction, and that odd and even are on different sides of the road. With stand and house number addressing, none of these criteria are met and therefore the best that these GPS devices can do is navigate to the centroid of the road centreline.

Without a street name, these GPS devices are unable to provide accurate navigation options.

The next quantum leap in improving navigation, which in turn will reduce response time and improve service delivery, is adopting the street addresses that have been allocated. However, allocating addresses is the easy part – integrating change in a way that is sensitive to the community is the challenge.