Working to a tight deadline and with constrained GIS capacity, a property valuation firm found business value in easy-to-use online mapping to realise its project.

On 28 December 2020, land valuation firm Valuers Afrika was awarded a contract by a Local Municipality in Mpumalanga to compile a valuation roll for the municipality by end of March 2021. A project which usually takes eight to twelve months had to be completed in three, with the first month falling at the tail-end of the holiday season.

With no scope and time to fly new aerial imagery, a tight deadline looming, and the firm’s contracted GIS professional recently retired, Valuers Afrika reached out to us at 1map to help deliver their project on time.

The valuation roll for public finance

A municipal valuation roll is a document with market-related values for all rateable properties in a municipality’s boundaries, including houses, farms, parks, and industrial properties. These valuations help municipalities determine property rates and taxes for the next three to four years. As it affects both ratepayers and the municipality financially, accuracy is of paramount importance.

Valuations in many parts of South Africa are complicated by the diversity of land uses, which make it difficult to group large areas together. Industrial, commercial and agricultural land regularly occur alongside one another. This is why Valuers Afrika developed their own Pro Valuer software 20 years ago for conducting valuation work. International software solutions don’t accommodate the local landscape, the company’s director Christiaan Winckler explains. 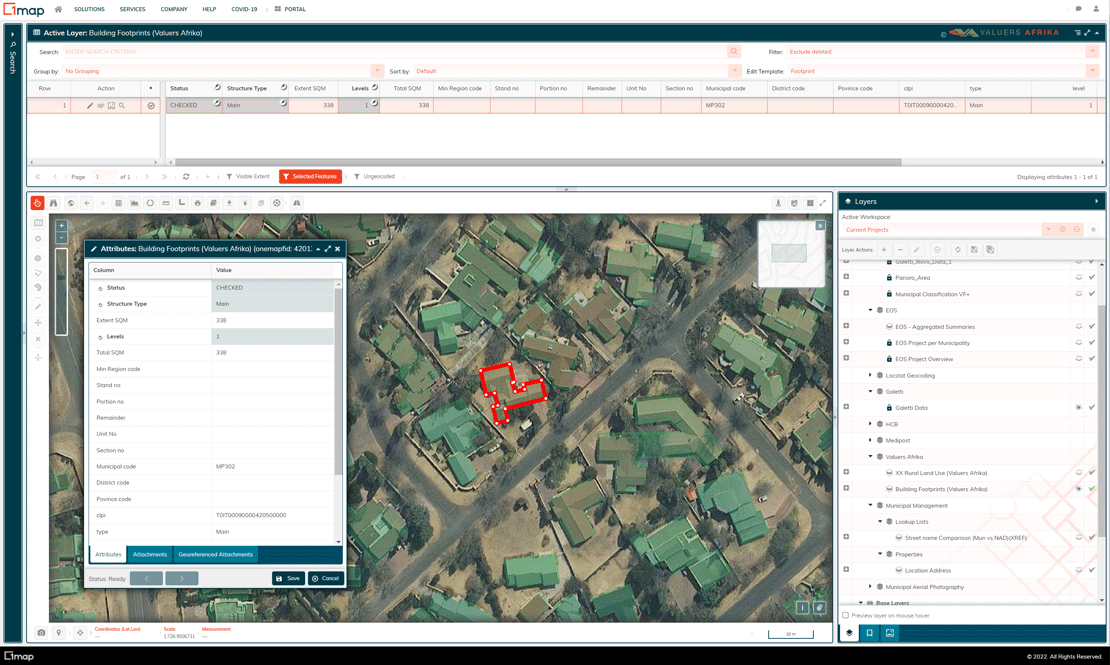 Municipal valuations start by acquiring deeds information that specify eligible properties for the valuation roll. To ensure the correct property is valued and to avoid duplication, the deeds information is mapped to the surveyed property boundaries (Cadastre) acquired from the relevant municipality, and overlaid onto aerial photos. This geographic information systems (GIS) desktop study ensures property boundaries and land-use types align. Next, the valuers visit each property to determine the final valuation.

There was no time to contract new aerial imagery to be flown, which is why Valuers Afrika chose the 1map mapping platform as it already contained the required National Geo-spatial Information (NGI) aerial imagery in its data catalogue.

Furthermore, 1map’s online mapping platform accommodated the firm’s existing workflow, allowing it to import and export data from its own software solution via interoperable formats.

“A lot of information on the 1map system meant there was no need to reinvent the wheel,” he says. One particularly useful functionality was the ability to measure the extent of structures or features on the property. For agricultural land valuations which take land use into account, the areas covered by different land uses (plantations, arable lands, grazing, or water bodies) on a farm could easily be measured on the map.

1map’s data operations team digitised building footprints and rural land use for Valuers Afrika. They were able to do this using 1map’s custom layers function. These layers, which can be toggled on or off, were then styled according to property features for fast visual identification.

“We had a million layers we could work from and switch on and off, which made it easy to sort out problems and compare property additions from the valuation we did eight years ago,” says Winckler. 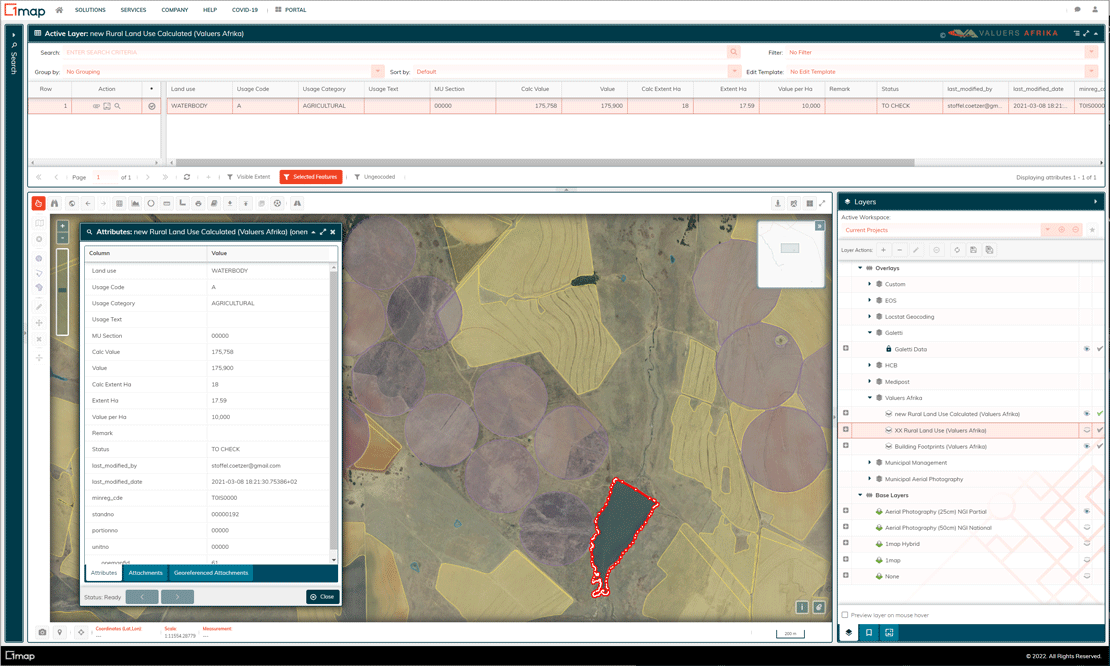 Capturing and classifying of farmlands in 1map

1map was able to perform quick data validation and quality assurance against the SG Diagrams stored in its own data catalogue, without the need for manual imports. This in itself contributed to delivering the project on time. The company even had its developers build new functionality for Valuers Afrika, such as a report generator, which will benefit other 1map users too.

Other useful features such as 1map’s integration with Google Street View aided site visits and inspections, as did the 1map Android app which made navigating to sites easy with Google Maps.

Ease-of-use even for non-experts

The online mapping platform did not require specialist GIS knowledge, nor specialised, expensive software licences. “1map allowed easy editing of features, which valuers did not know how to do in Esri,” Winckler adds. When required, the 1map team gladly and promptly provided training-on-the-go. 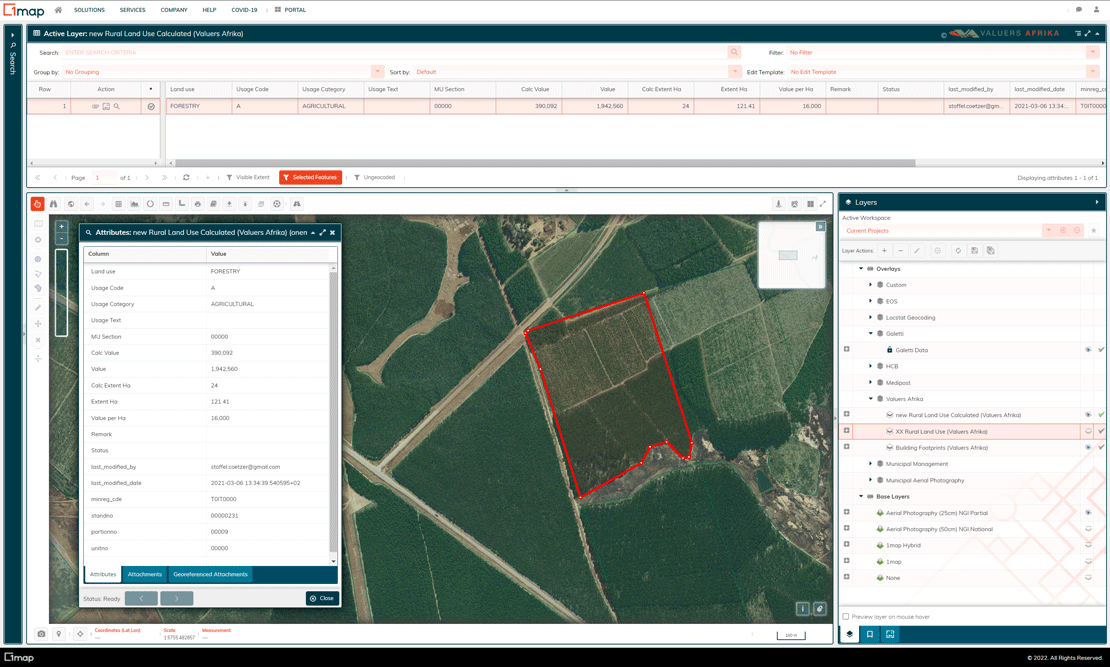 Removing the need for a dedicated GIS team and licences also eliminated the to-and-froing of requests which the valuers could now execute themselves. This sped up the project by eliminating waiting times for request resolutions.

The end result: the Local Municipality valuation roll was delivered accurately and on time.

In future, Valuers Afrika will no longer print maps or rely on many PDF maps, because all its mapping needs are covered by 1map.

Even after the municipal valuation contract concluded, Winckler and his team kept their 1map subscription for farm valuations. The mapping platform helps them identify land parcels and resolve their clients’ issues. This has become especially helpful in serving agricultural clients, since the firm conducts farm valuations with 1map as an essential tool.

Maps are becoming increasingly important in everyday life and business, says Winckler. Even when visiting farms for valuations, he finds farmers using maps to show the precise lay of their land, instead of verbally communicating it as they've done before.

Valuers Afrika chose to work with us based on our established reputation and ease-of-use. If, similarly, you are looking for a simple tool that will improve the accuracy and turnaround time of your valuations, schedule a consultation with our team today. We will be happy to discuss how an online mapping solution can address the needs and challenges you have.

1map helps cities and companies map and keep track of what's important to them with a central collaborative mapping platform. You can either sign up to 1map to start mapping your own data for free or get in touch with us to discuss how our web mapping services can address your workflow challenges.